There are no absolutes in science. The closest you'll get is in physics, but most of the so-called Laws remain either fundamentally unexplained and/or not quite what we thought they were. If asked to name one "obvious truth" about the natural world, I suspect most folks would immediately come up with something about gravity. "If I let go of this cute kitten, it will fall." But would you believe that we have almost no idea why this is so? We have nothing but competing theoretical frameworks for why things fall, and to get more technical, why gravity should exactly equal an object's inertia. No [prevailing] idea whatsoever. To make matters worse, gravity appears to "misbehave" at astronomical distances. The concepts of dark matter and dark energy are stabs at explaining why our observations of big objects' movement through the universe do not at all conform to expectations under gravitational theory, and our most distant manmade satellites are typically not where we expected them to be. The explanations could be mundane... or not.

Biology is far messier, if much better understood. In fact, as a biologist it is difficult to even define our field! Think on this for a moment: how would you define life? Which set of characteristics makes something living, from people to peas to protists? Let us consider two different candidates.

The first is from NASA, whose stalwart crew of scientists are engaged in the very business of finding weird, unexpected kinds of life out there in the big empty.

"The set of common characteristics that distinguish living organisms, including such properties and processes as order, regulation, growth and development, metabolism, response to the environment, reproduction, and the capacity to evolve over time."

Clearly there's something going on behind the scenes to have two such dramatically different definitions. NASA's definition is more inclusive, which is to be expected when anticipating exotic forms of "life," but what exactly are the textbook makers ruling out?

Why, it is your friend and mine, the pesky little bugger that's had me coughing and cursing for the last week: the virus.

Viruses and bacteria are together responsible for most human infectious diseases, but are fundamentally very different things. A bacterium is an organism by any definition, composed of a single discrete unit called a cell. Its arrangement into wholly or semi-autonomous cells puts it in the same league as all other life (by the textbook definition) on Earth: it grows, it divides, it responds to stimuli, and as an imperfect reproducer its populations are capable of change over time.

The virus is not a cell. Writers for pop media often get this dead wrong. For example, consider an episode of the current Fox television series Fringe. The show features both surprisingly excellent characters and some of the mostly howlingly terrible "science" I've ever seen. A sluglike parasite used in assassinations was revealed to be a genetically engineered supersized cold virus "cell." Sigh.

Viruses are actually a diverse grab-bag of maybe-organisms consisting, at a minimum, of genetic information and a protective coat. The info can be stored either as DNA, as in all cellular life on Earth, or as its chemical cousin RNA. The coat is made of protein and sometimes fats. A virus is basically the nasty hacker of the biosphere: it comes into contact with some cellular organism, injects its genetic material, and hijacks that cell's machinery to make more copies of the virus. In some cases, the cell basically explodes in order to release a swarm of new viruses. Other, more sinister viruses actually incorporate themselves into the host's DNA and "hitch a ride." Potentially forever. A good deal of the so-called "junk DNA" in your genome is actually viral information: some dormant, some not so much!

How do you fight something like that? We have antibiotics against cellular organisms, like bacteria: chemical compounds that selectively interfere with the pest's way of life. Not so with viruses. Antibiotics have zero effect on them, and are actually counterproductive in that they give rise to resistant strains of bacteria that can then feel free to rise up and take on humanity. Vaccination is currently the best defense against viruses, since the limited supply of drugs that can actually hamper the viral life(?) cycle often do a good deal of damage to the patient's cells too. 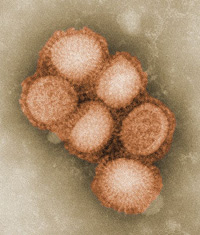 So. What do viruses lack that makes some consider them non-living? Do they possess order/structure? Of course; take a look at this micrograph of swine flu. So does ice, great. Reproduction? Check, but so does fire. Evolution? Yes oh yes. Metabolism? That one's a maybe, since it hijacks a host cell's metabolic machinery. The "problem" lies in virus' inability to directly grow (although they self-assemble) and, more importantly, maintain an internal environment different from what's outside their coat.
Swine flu (H1N1). Photo Credit C. S. Goldsmith and A. Balish, CDC, from Wikimedia Commons.

Okay, I could buy that, except some bacteria run into the same problem when they face certain stresses. In these circumstances they form spores, which are dormant, hardcore, last-chance structures used to ride out what would otherwise be certain death. Some important causes of human disease form spores, like the agents behind anthrax and botulism. Spores do not have metabolism, do not reproduce, do not grow, do not maintain that internal environment... they are basically virus-like, waiting for favorable circumstances before developing back into bacteria. While a bacterium may form a spore while it waits for nutrients to come along, viruses wait for new host cells.

Personally, I side with NASA and find it hard to call spores and viruses nonliving. There is a tremendous gulf between viruses and uncontroversially nonliving particles, far greater than that between viruses and some bacterial stages. At worst, viruses are renegade bits of life. Hypotheses of the origins of viruses, events which have probably occurred innumerable times through the history of life on Earth, usually stipulate these bits of genetic information "going rogue" and escaping the cell with the bare minimum of machinery for propagating themselves. Once they're out in the biosphere, evolution takes over and all hell breaks loose.

And that's what life is all about.

Next time: touching again on the misrepresentation of viruses in pop culture, particularly movies.

Brief Hiatus for A Related Project

Sorry for the extended absence. I'm currently writing my unit of this summer's Intro Bio for Non-Majors, which poses many interesting problems. Moreso given that I drew the "Cell and Genetics" unit, which is the driest by far of the lot. My task is thus: condense and sugar-coat a colossal and diverse set of fields into eight lectures for people who really, really don't want to be there.

So far, my syllabus includes includes beer, Ridley Scott's Alien, Maury, Jurassic Park, and mass extinction among others. I think I'm going to focus on three things: the molecular nature of life (and the nebulous definition of the latter), diseases/disorders, and how to recognize bad biology in movies, tv and other pop culture.

I suspect that I may adapt one or two of those topics for this blog.