A Day Late and a Dollar Short

Please forgive the absence. June was spent running analyses and putting together my talk for the Joint Meeting of Ichthyologists and Herpetologists (nerds working on fishes and reptiles/amphibians, respectively) in Providence. Two glad tidings: I have returned to wax scientific on subjects, and I was honored to receive the ASIH Stoye award in General Ichthyology at the conference. Before the year is out, I will write an article here on the same: what the interrelationships of batoid fishes, my study group (skates, rays and allies), can tell us about widespread convergent evolution and the effects of the end-Cretaceous extinction event on their current patterns of diversification.

This one has been a while coming. Toward the end of last year, several science news outlets picked up a striking article in the journal Biological Conservation. In short, it suggested that current guidelines for setting minimum population sizes for protected species, like the black rhinoceros, are at least an order of magnitude (10x) too low to adequately protect them from extinction in this century. The current guidelines adhere to a "50/500" rule, in which a minimum of 50 adults are required to avoid the negative effects of inbreeding, and a minimum of 500 to be able to adapt to long-term environmental changes or rebound from a catastrophic event.

Ten times too low. Put a big, flashing exclamation point at the end of that one. Horrifying corollaries are immediately evident: many species are already too far gone to be preserved in the long term even if we dropped everything to triage them now, and species we think we've done a bang-up job of protecting to date may just need one calamity to drop them below that point of no return. In light of the political difficulties - an understatement by any measure - of maintaining even today's meager/modest conservation measures, a tenfold increase will never happen. These species, humble to majestic, mountain gorilla (~400) to desert pupfish (42!), are going away sooner than we'd like.

It is not an encouraging picture. 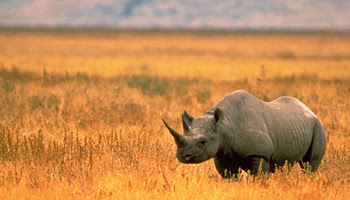 This is not a political blog, so we'll leave the issue behind and look at what these numbers mean. Why do we need X number of animals to avoid catastrophe? The first barrier, inbreeding, is intuitively obvious: offspring are produced by close genetic relatives. Put another way, the two copies that an individual carries of each her genes have a high probability of being identical by descent, or having come from the same ancestor (grandma) independently through each parent. Gross, yeah. But why is this necessarily a bad thing? Every human has two identical copies - alleles - of at least some genes, and we're not all running around with horrible genetic abnormalities. Things go south (no pun intended; I am from Texas after all) when you deal with genes that have a healthy version and a defective one.

At many gene locations in your DNA, you have one healthy allele and one defective one. In most cases, the normal copy steps up and does a stalwart job compensating for the freeloader. You'll never notice that one copy is bad, and so we call that copy a recessive, or hidden allele. That's the good news. The bad news is that they're ticking time bombs on a generational timescale. When you reproduce, one of those alleles is "drawn" at random to end up in your sperm or eggs. If you pass on the healthy version, great, your child will be A-OK for that gene. If not, you'd better hope that your mate contributes a healthy copy to pull the weight for your freeloader. If two recessive alleles end up in the offspring, she won't be able to make that gene's normal protein product. The effects may be mild, and even desirable to some: blond hair or blue eyes. Or instead, they may cause a serious genetic malady like cystic fibrosis or sickle cell anemia. If you have one healthy and one hidden, defective allele for a disease-associated gene, you are a carrier. Everyone on the planet is a carrier for an unknown, but probably not inconsiderable, number of genetic disorders. This is the basis behind genetic testing, which is becoming cheaper and more widely available every year.

The rest is easy to follow. If you're a cheetah and there are only a handful of your species left (the cheetah-reality is not that dire), the odds that you are closely related to any other cheetah you see are much higher than they are for a species with larger population sizes, like industrialized humans. If you mate with that cheetah, your odds of having the same set of alleles from a common ancestor are high, and an increasing proportion of offspring will either have two healthy or two defective copies of a gene - allele fixation. You can see how the situation degrades quickly once disease traits become universal in a population. Lost genetic diversity takes a long, long time to be recovered.

The second, higher requirement for a minimum viable population size (the 500 of the 50/500 rule) is trickier to understand. It builds on the concept of inbreeding, but the higher number of organisms keeps a larger gene pool - the total genetic variation in a population - available into the future. High genetic variation gives a population options, so to speak, in the face of environmental change. There may be warmer-adapted cheetah alleles that would do better under increased temperatures, or slightly faster cheetahs that can better keep up with Thomson's gazelles, which are under similar pressures. Perhaps most importantly, it provides options for [pathogenic] disease resistance.

Viruses, bacteria, and other parasites are engaged in a constant arms race with their hosts at a molecular level. Genetic variability goes a long way to ensure that at least some cheetahs will survive a potent disease, while if they are genetically homogeneous, a single bacterial strain that has "figured them out" can wipe out the whole population in one fell swoop. As a great recent example, humans of European descent have a much higher incidence of a genetic mutation called CCR5-delta32 that provides resistance to HIV. This mutation also appears to confer resistance to the great historical European plagues. That is, some Europeans had this mutant allele and became resistant to plague, while other didn't and were selected against. If Europe's population had been much smaller, this mutation may have never arisen and the entire continent could have been taken out in one of those dread epidemics.

A grim picture, to be sure. The next steps are political, but having been introduced to the science, hopefully you are in a better position to weigh the costs and benefits of conservation measures for yourself.

Here's to an educated democracy.
Posted by Neil at 8:23 PM 4 comments: