The first decade of this brave new century was characterized by dramatic upheavals, often violent, in politics, business... and film. Perhaps through widespread disillusionment in the wake of crises in security and finance, perhaps merely the pendulum swinging back from the fantastic (read: "divorced from reality") flavors of storytelling in the 1980s - early 90s, the public has rushed to embrace the gritty and believable. Joel Schumacher's candy-colored Batman films were usurped by Christopher Nolan's dark masterpieces, achieving almost ridiculous commercial success. Peter Jackson breathed life into a vision of The Lord of the Rings that eschewed most of the magic and occasional levity of the book, and also featured a rather mundane, if attractive, aesthetic. Additional existing franchises and concepts from other media leapt to the big screen or were rebooted, and surprisingly often attempt to feature some "scientific" hook to enhance the believability of the tale. One of the rising stars of this movement is our enigmatic acquaintance, the virus.

Viruses are now almost universally implicated as the nefarious causal agent in modern zombie tales or close cousins, such as the animalistic, deranged "infected" in 28 Days Later. Alas, the point of this article is not to tackle the questionable physiology of a zombie (actually, that sounds like a good one for another day), but rather to touch on Hollywood's mixed success in portraying the pathology of viruses.


The virus in 28 Days Later 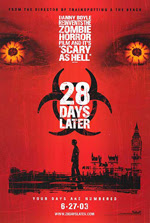 is particularly terrifying in that, 30 seconds after exposure, a victim is reduced to a hemorrhaging, raging volcano of virus-laden fluids. One infected person in a crowd can effect some sick parody of The End Times in mere minutes. Viruses in many other films spread with similar urgency, in some cases reanimating a corpse within two minutes of exposure (Dawn of the Dead reboot). What does the real world have to say about this?
©2002, 20th Century Fox.

Viruses are constrained by the same physical laws that the rest of us are, regardless of your definition of "life." A generic viral life cycle, and there are all sorts of bizarre variants, goes something like this:
1) find a host cell;
2) enter the host cell, or inject genetic material;
3) use own or hijacked machinery to replicate genes and coat proteins;
4) stay forever, or have all your copies erupt out of the host cell;
5) repeat.

Each of these steps requires time, particularly step (3). This is even more of a problem for related scifi concepts involving rapid gains of animal/plant/fungal tissue, or what I call "The Werewolf Problem." I'll leave that for another day.

The window of time between initial exposure and the point at which symptoms first emerge is called the incubation period. During incubation, viruses are reproducing and spreading through host cells but are at insufficient numbers to make much of an impact. Yet. So how long is this timetable? Clearly 30 seconds for complete system takeover is unrealistic.

The fastest acting human virus, as far as I have been able to discover, is the stringy little fiend below, ebola. The incubation period of ebola is 2 - 21 days, but usually 5 - 18 [source: Emerging infectious diseases 9(11):1430-7; via Wikipedia]. The fastest.

A common pattern of viral strategies is a correlation between their agressiveness and their ability to be transmitted. Ebola and similar viruses have evolved a strategy that is very much living (yes, I said it) on the edge. They emerge, spread and kill so quickly that they run the risk of not being able to find a new host and suffering local extinction. Compare this to the less common strain of the virus that causes AIDS, HIV-2. HIV-2 often degrades the immune system more slowly than does HIV-1, leading to higher long-term survival rates. It also is less successful at being transmitted between people. For an analogy in honor of the ongoing NBA finals, it may only shoot 60% from the field compared to HIV-1's 80%, but gets an extra five minutes of playing time. The natural world is full of these trade-offs, in which organisms fine-tune their life strategies over time.

The ones that fail? Well. We don't see those guys anymore.

On that note, next time I will likely bring up some recent, distressing speculations about the fates of endangered species.
Posted by Neil at 3:23 PM No comments: