The Devil Ray's in the Details

So mantas aren't a thing anymore... - paraphrase, David Shiffman's liveblog of my talk at the recent meeting of the American Elasmobranch Society.

Wow, is that going to require some explanation! Did I steal these guys away under cover of night? Did they pull a "so long, and thanks for all the fish" on us? No, this is a story about the power of naming, and one that may have serious implications for the conservation of these amazing animals and their close relatives.

Human beings love to name things. We do it vigorously and redundantly: a single fish species may be christened with a dozen or more common names by people in different geographic areas, times, or even marketing departments! It helps to have an international-standard system of naming animals to give this enterprise some consistency. It doesn't matter if you know it as Chilean Sea Bass or the Patagonian Toothfish, people worldwide will be happy to confirm for you that Dissostichus eleginoides is indeed one ugly customer.

This system of precise identification in which scientists apply a formal code to name organisms is called binominal nomenclature ("two-part name"). This is often incorrectly called "binomial" nomenclature ("two number," a mathematical expression), even by professionals! The first part of the name is the genus, which can apply to between one and many species that are closely related and resemble each other. The second part of the name is the specific epithet, which applies to one and only one species. These names are usually derived from Greek and Latin. For example, Batrachognathus volans translates as "flying frog-jawed" one, an apt appellation for an odd pterosaur from the Late Jurassic.

A genus (plural genera) should describe some small set of similar organisms. This group should be defined by a common ancestor, all of its descendants, and nothing else (Figure 1A). We call these natural groups, or clades. 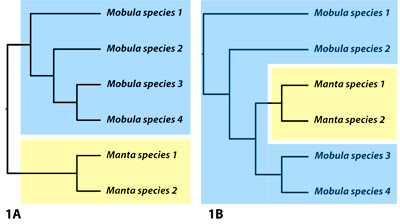 This is the ideal case. What happens if you end up with something like Figure 1B? Here, you can see that one genus is "nested" inside the other one: Mobula is not a natural group because it inappropriately excludes Manta. It's easy to analogize this to how, in some cultures, family names are passed down the paternal line. If you, your father, his father, and all male relatives in between are named "Lannister" but one of your brothers is named "Baratheon," something's gone wrong in the process of naming!

Under the current classification scheme, there are two genera of "devil rays": two species in the genus Manta and nine species in the genus Mobula. Besides some slight differences in body proportions, there are a few characteristics that distinguish Manta from Mobula. Most notably, Manta lack teeth on the upper jaw and have a mouth at the end of the head, while the mouth of Mobula is underslung as in most sharks. In recent years it has usually been held that the classification of devil rays is a valid arrangement, following Figure 1A.

DNA sequence analyses from my doctoral dissertation work [1], followed by a large-scale study performed by my graduate advisor and colleagues [2], suggested that Manta is nested within Mobula. While not all species were sequenced, Manta birostris was indicated to be more closely related to Mobula japanica than it is to other sequenced Mobula. This is based mostly on evidence from one or two genes, with a couple of others rather uninformative. It was compelling enough to get me to delve back through the scientific literature on the anatomy of the group, and what I found was surprising. 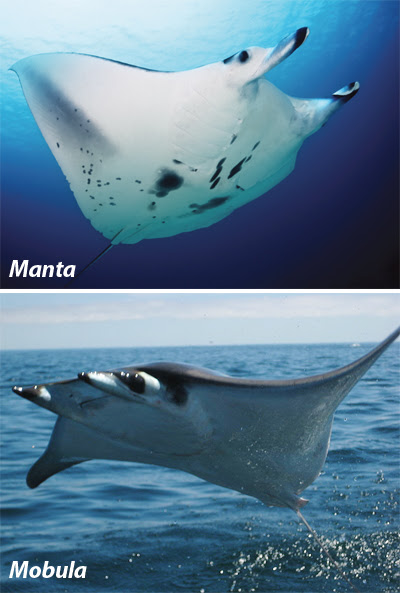 It turns out that biologists who have taken a close look at devil ray anatomy have been quietly suggesting for nearly 15 years that Mobula is not a natural group! [3,4] For example:

• Mobula japanica (>3m wide) and Mobula mobular (>5m?) are among the largest devil rays, comparable in size to the recently described Manta alfredi. [5,6]

• Among devil rays, only Manta, Mobula japanica, and Mobula mobular have caudal spines (the "sting" in "stingrays"). [5,6]

So is this enough to overturn the current system of classification for devil rays? Not yet. If any changes are to be proposed, someone first needs to perform a formal "taxonomic revision" of both Manta and Mobula. This means that they need to present a sound, peer-reviewed case for the reclassification of these species, which will require physically re-examining them and ideally presenting corroborating DNA evidence. This must include the "type species" for each genus: Manta birostris and Mobula mobular. A type species is the one to which the name of the genus is permanently attached; in this case, it defines "what a Mobula should be." There are to date no available DNA sequence data for Mobula mobular, although we can predict that they will group most closely with Manta and Mobula japanica.

Assuming the evidence continues to build that Manta is nested within Mobula, what happens next? The most likely case is that the genus Manta will cease to be valid, subsumed under Mobula as a "junior synonym." Mobula has precedence under the rules since it was described in 1810, versus 1829 for Manta. There are mechanisms by which a name can be suppressed: the proposed renaming of the fruit fly species that's the cornerstone of much of modern biology would be a nightmare beyond measure (see here), but Manta is unlikely to qualify. Their common names will remain "Manta Rays" and the world will go on turning. Given the scarcity of materials from some species and their often colossal size, I don't envy the gal/guy to undertake the formal review of the devil rays... but it needs to be done. Five bucks says that Manta is going away in the next ten years.*

So why does this matter? Legal issues and conservation.

Savvy folks sitting in the conference room or reading David's liveblog quickly seized upon this question. With Manta recently receiving protection under the Convention on International Trade in Endangered Species (CITES), would lumping these guys in with Mobula expose them (1) under a legal technicality and/or (2) as less unique and worthy of conservation than when they had their own genus? Fortunately, shark conservation experts including Sonja Fordham (President at Shark Advocates International / Deputy Chair at IUCN Shark Specialist Group / conservation rockstar) were on hand to address these concerns.

Fears of CITES loopholes appear to be unfounded. Current protection schemes are thought to be engineered to continue to protect the two named (plus a third suspected but undescribed) species of Manta. Prying at loopholes is sadly unnecessary: countries that would otherwise seek to do so can apparently just opt out of CITES protections (I am aiming an unimpressed glare squarely at you, Canada and Guyana).

In short, this is less a threat to mantas than it may be an opportunity to extend protections to the other devil rays. Most of these species are heavily affected by both targeted fisheries and as bycatch, but they exhibit human-like life histories that make them extremely vulnerable to such pressure. Despite this shared and imminent danger, only Manta - with its tremendous charisma - seems to have found many champions in conservation, evidenced by the fact that only Manta species were proposed for CITES listing. Changing its name won't make these folks give up the cause, but folding all of the devil rays into a single genus can underscore the similarities in vulnerability across species in this group, strengthening the case for offering them equal safeguards in the future.

"Mantas aren't a thing anymore"? Sounds good to me.

*Offer valid for first claimant as of ten years from the date of this article's publication. If I win, I'll pick one of you at random and demand my fiver.

Newer Post Older Post Home
Subscribe to: Post Comments (Atom)
"There is grandeur in this view of life... that, whilst this planet has gone cycling on according to the fixed law of gravity, from so simple a beginning endless forms most beautiful and most wonderful have been, and are being, evolved."